This Christmas, the Red and White Santa turned green as he joined hands with Dedi Loku (Tree Man in the Kui language), the green superhero to give tree gifts to people. Instead of the sledge pulled by reindeer, the Santa had a bullock cart which carried the saplings as well. 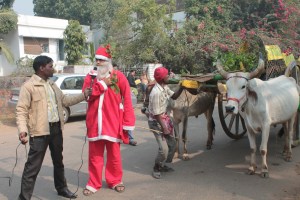 The Bullock Cart with Santa Claus and Dedi Loku moved from the Bakul Library in Satyanagar behind the Catholic Church to Janpath to shouts of “Gacha Neba Gacha, Santa Deuchi Gacha” by about 30 young college students, all volunteers of Bakul Foundation. The volunteers mobilized and motivated the curious onlookers to plant trees and take the saplings from them. About 300 medicinal plants and trees such as Bakul, Kanchan, Jamun and Amla. 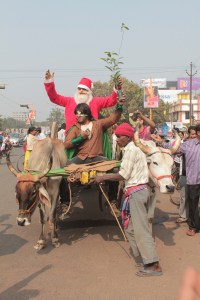 This Tree for Free is an initiative under the My Tree Campaign of Bakul, which aims to create an emotional connect between individuals and trees by promoting individual ownership of trees. The main objective of the My Tree Campaign is to promote gifting and plantation of trees as a cultural practice where it becomes a part of the everyday lives of people.

The campaign, which started in 2009, has many components through which the idea of gifting trees is promoted. There is a campaign on social media in which hundreds of people have profile pictures with trees. Environmental Film Festivals and workshops have been organized in schools, colleges and apartments  to create awareness, and most importantly, to suggest how individually, each one of us can contribute to address the problem of climate change.

Tree for Free is an attempt to break the inertia that people have in planting trees. It comes from a realization that many want to plant trees but they keep procrastinating. Hence, this makes it easier by taking the saplings to the people. Many people in the city have not known the joy of planting a tree and seeing it grow. This initiative facilitates that and over 8500 saplings have been distributed so far to individuals, who have planted them. Many people have come back asking for more saplings after the excitement of seeing their tree grow.

The My Tree Campaign has received international recognition now, as it is being featured in an Exhibition from November 2014 to June 2015 in the Museum of Modern Art in New York, widely considered the Mecca for contemporary art and architecture. The curators of the exhibition interestingly identified the campaign as one of the very creative and impactful endeavours to address environmental challenges in urban areas in the world.